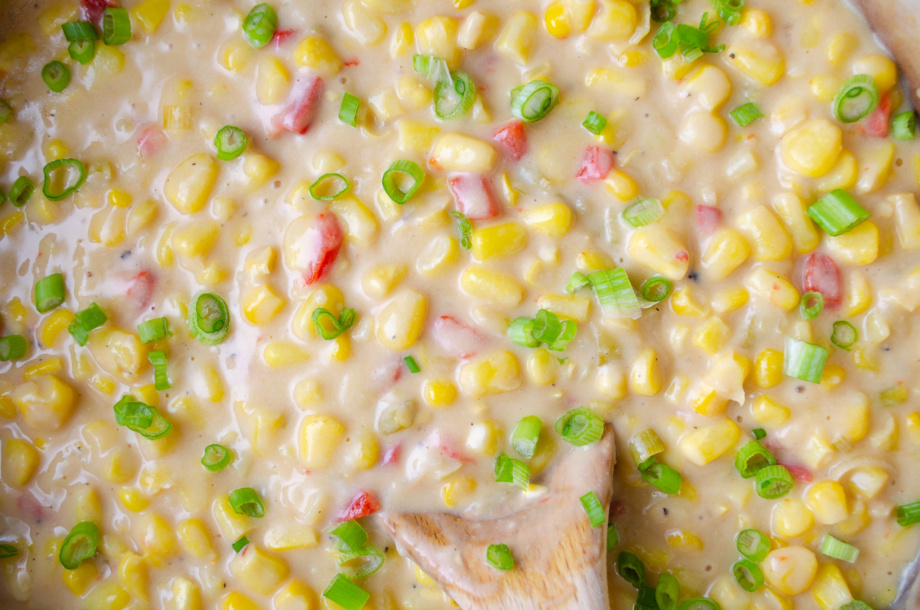 Who would ever think you could make such dramatically different recipes—a pasta, a chowder, and savory cakes—from one Base? Perhaps it’s obvious that Creamy Corn Chowder could stem from Cream-Style Corn. But we’re not sure we would have envisioned that with just three additional ingredients—sundried tomatoes, fresh basil, and pasta—that Cream-Style Corn would morph into Creamy Corn Rigata. And we would have never suspected that just by adding cornmeal, flour, and basil to the base, you’d get Quick Corn Cakes. And yet, like siblings, these three very different dishes are all born of the same Base.

Late summer when corn is plentiful, you’ll want to make it with fresh corn. Other times of the year, frozen corn makes an amazingly good, incredibly quick Cream-Style Corn. The recipe is easy too. Just heat a little oil or plant-based butter in a large pot and add sliced scallions and diced roasted red peppers, which add both color and flavor. In just a couple of minutes, it’s time for the flour which ultimately thickens the creamy coconut milk that immediately follows. The corn is next. After that, there’s just one more ingredient—nutritional yeast—which adds nuttiness and depth of flavor. Once all of this comes to a simmer, you’re ready to make one of the Jumpstart recipes.

If you need to make a dish as soon as the Cream-Style Corn is done, Creamy Corn Rigata is your recipe. Bring a large pot of water to boil the pasta while the corn is cooking. Once the creamed corn is done, pull off half, flavor it with sundried tomatoes and basil, and toss it with the pasta.

When you make Cream-Style Corn, you get tonight’s dinner with enough to make a completely different meal a night or two down the road. What a smart way to cook.

Utterly creamy and totally Planetarian, this Base (which comes together in about five minutes if using frozen), stands on its own as a delicious bowl of creamed corn or gives you a jumpstart on several delicious meals. From the Base you can make a nearly instant Simple Corn Chowder, Creamy Corn Pasta, or Quick Corn Cakes, which all make dinner for four to six. 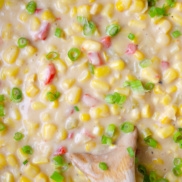 *To yield 8 cups of corn for this recipe, you’ll need about 10 ears of corn, kernels cut from the cob or 3 pounds of frozen corn, defrosted and drained.The recipe yields a generous 8 cups, enough for 2 Jumpstarter recipes serving 4-6). It easily halves if you’d prefer to make this as a side dish instead of a base recipe.And finally, if you choose to serve this cream-style corn as a side dish instead of turning it into soup or pasta, stir in the scallion greens, along with 1/2 cup chopped fresh basil, parsley, or cilantro. 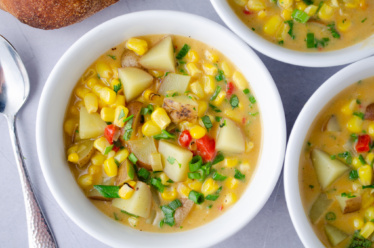 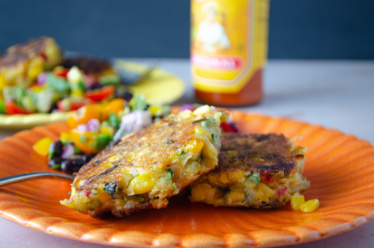 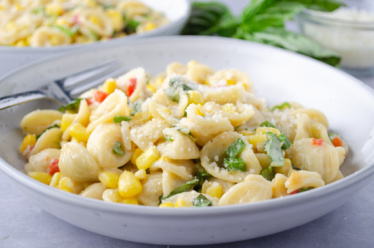