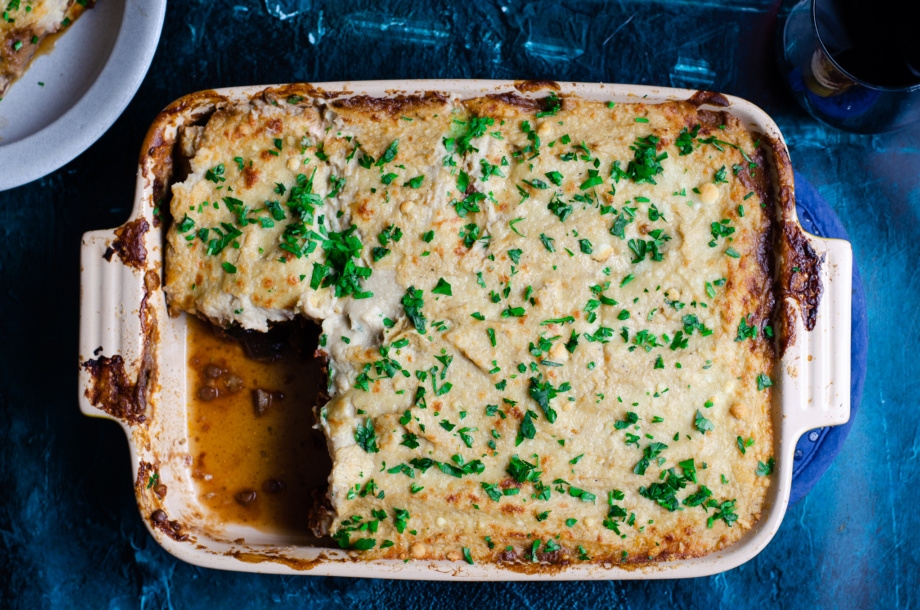 I went through a phase when moussaka was my regular party dish for a crowd.  I loved that it was like lasagna. Yes, there were components to make and layers to assemble, but once the dish was built, the main course went on autopilot. Nothing to do the night of the party except uncover it and pop it in the oven. The savory cinnamon-scented aroma wafting from the kitchen when guests arrived stimulated their palates and piqued their curiosity.

When hosting an adventurous lot, I’d make it with lamb. For the general consumption, I’d sub in crowd-pleasing beef. It was finally time for me to develop a moussaka that everyone could enjoy.

Simplifying the Eggplant Layer of the Moussaka

Planetarian Moussaka starts with a layer of eggplant. Some moussaka recipes slice the eggplant into planks for distinct layers. For two reasons, I opted against this method. Roasting eggplant slices meant dirtying multiple pans and cooking in batches. It also meant I couldn’t flavor the eggplant as much as I wanted. By dicing the eggplant, I was not only able to fit two eggplants on one large, rimmed baking sheet, I could also infuse the eggplants’ multiple cut surfaces with more flavor. Roasted at 500 degrees, the eggplant was spotty charred, with one stir, in twenty minutes. Eggplant cooked this way offered great flavor and texture and held together well as the first layer of the dish.

The next two layers were easy. I just visited the Capsule Kitchen and picked out Lentil-Walnut Mix, Garlicky Tomato Sauce, Velvety Alfredo, and Voila, Planetarian Moussaka was born. Yes, there are three components to make, but when you make Garlicky Tomato Sauce, you’re left with nearly three quarts of sauce for another three meals for four—soups, chili, curry, Bolognese and more. And when you make Lentil Walnut Mix, there’s another half batch to make sloppy Joes, stuffed peppers, or lettuce cups for another meal.

We’re proud to present your new Planetarian party dish… with a serious jumpstart on four more meals later in the week. Now that’s a good deal! 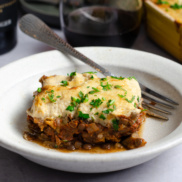 When making Velvety Cauliflower Alfredo, don’t forget to add only 1 cup of coconut milk and not the full can. If you can’t find za’atar, substitute 1 1/2 teaspoons each: dried thyme and sesame seeds 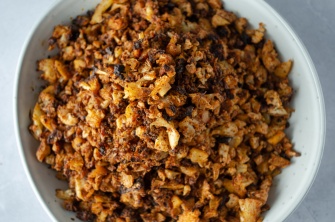 How To: Roasted Riced Cauliflower