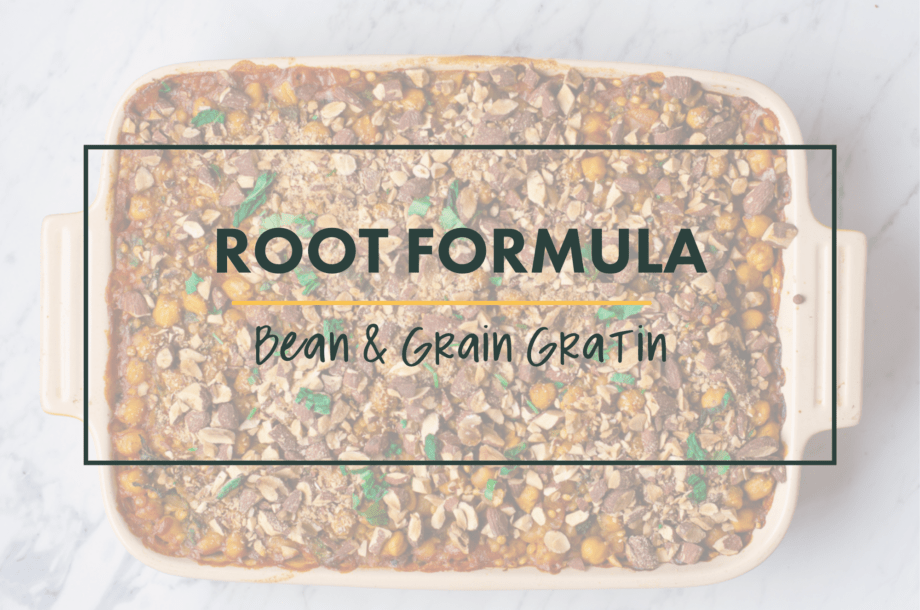 This is a Root Formula, a simplified recipe that shows which ingredients are core and which can be changed to create different flavor combinations or use what you have on hand.
See our other Bean & Grain Gratin Variations on this Formula below.

We’re always looking for fun ways to jazz up beans and grains, and this Bean and Grain Gratin Formula is a wonderful example of just how tasty eating meatless can be. This dish evolved in a funny sort of way, and here’s our story.

A few weeks ago, I found an online recipe for a very appealing white bean casserole with a crisp garlicky panko topping. I made it and enjoyed it very much. The only problem was that the beans were more stew-like than casserole. I liked the idea of this crispy breadcrumb-topped baked bean dish, I just wanted it to hang together and be more substantial.

So, I made it again, stirring orzo pasta into the simmering beans, turning the mixture into a 13- by 9-inch baking dish. First, I topped it with crumbled feta, followed by the garlicky panko crumbs. Then I baked it until golden brown and bubbly. The orzo was just the culinary glue I had hoped for, and this bean and grain partnership offered a crowd-pleasing, protein-rich meatless dish.

I realized this baked bean and grain gratin was not limited to white beans and orzo. Any beans would work if I paired them with a grain that would soften up and absorb a quart of broth by the time the crumbs were golden brown. I could make black (or any color!) beans and rice, and chickpeas and pearl couscous certainly fit this formula.

So how does the formula work? If you need to make the dish fast, start with canned beans. If have time (and want to save money), start by soaking a pound of beans overnight and then cooking them.

In this dish we use the bean cooking liquid as part of the one quart of broth you need to make this gratin. If you soak and cook the beans the Planetarian Life way, you’ll need very little broth to make up the difference. The only exception is with black beans whose cooking liquid muddies the look, so drain and rinse those beans and use the full quart of broth.

Like many Planetarian Life recipes, Bean and Grain Gratin Formula starts off with sautéing onions and garlic, then you add spices and/or dried herbs. Once the aromatics have softened, add most of the remaining ingredients—the beans, broth, tomatoes, and grains of choice. While this mixture comes to the simmer, prepare your crunchy topping. When the mixture starts to simmer and the grains have partially absorbed the liquid, stir in the fresh herbs, pour the mixture into a 13- by 9-inch baking dish, and top with the crunchy topping.

For the white beans, we’ve stuck with olive oil- and garlic infused panko. We used crushed tortilla chips for the black beans and rice, and chopped roasted almonds for the chickpea and couscous dish.

The thirty-minute baking time and the generous yield makes this crowd-pleasing dish perfect for gatherings with family and friends. And if your crowd isn’t so big, the recipe halves easily halves.

Use this formula to create your own flavor profiles, or follow one of the variations we’ve developed –  Black Bean & Rice Gratin, Mediterranean White Bean & Orzo Gratin, or Chickpea and Pearl Couscous Gratin. 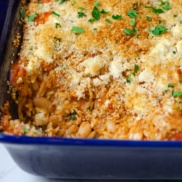 This recipe easily halves and if you do, you can cook it in one of two ways—simply follow the recipe here and bake it in a 9-inch square baking dish. Or, cook it in a soup kettle until the liquid has absorbed and grains are tender, sprinkle it with the Crunchy Topping, and carefully broil it until topping has browned.

Variations on Bean and Grain Gratin: 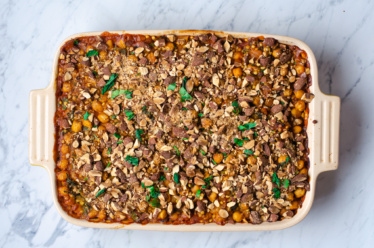 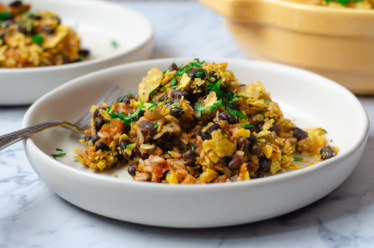 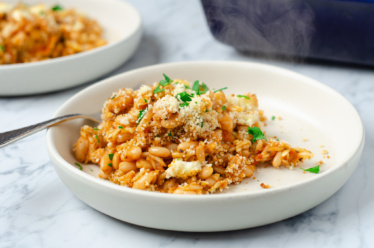