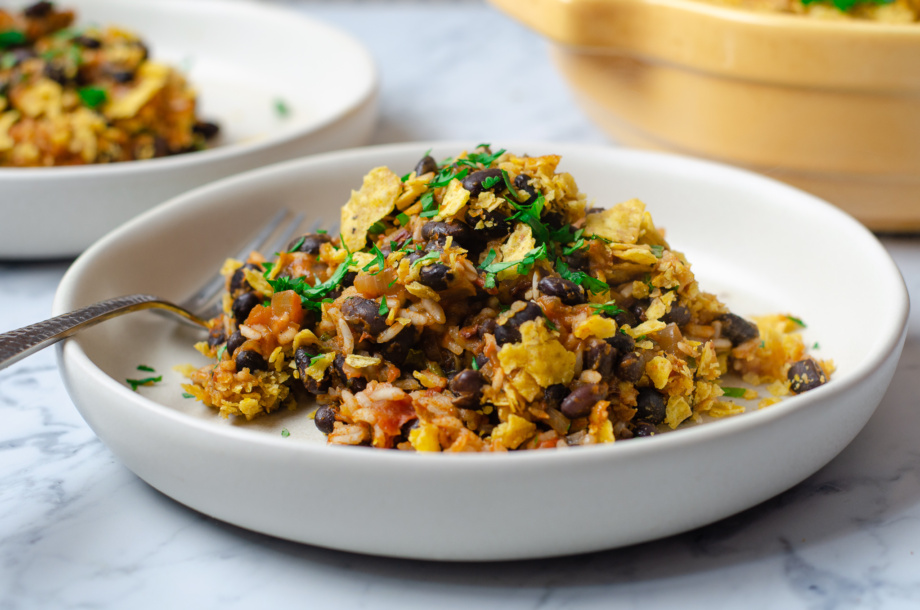 This is a Variation on a Root Formula, a simplified recipe that shows which ingredients
are core and which can be changed to create different flavor combinations or use what you
have on hand. See our other variations at the bottom of the Root Formula page.

We’re always looking for fun ways to jazz up beans and grains, and this Smoky Black Bean and Rice Gratin is a wonderful example of just how tasty eating meatless can be. This dish evolved in a funny sort of way, and here’s the story.

I first developed Mediterranean White Bean and Orzo Gratin and realized this baked bean and grain dish was not limited to white beans and orzo. I could pair any bean with any grain that would soften up and absorb a quart of broth by the time the crumbs were golden brown. Classic black beans and rice as we offer here would certainly fit into this formula.

Here’s how the formula works. If you need to make the dish fast, start with canned black beans. If you have time (and want to save money), start by soaking a pound of black beans overnight and then cooking them.

Like many Planetarian Life recipes, Smoky Black Beans and Rice starts off with a sautéing onion and some garlic, to which you add cumin, smoked paprika, and dried oregano. Once the aromatics have softened, add most of the remaining ingredients—the black beans, broth, tomatoes, and rice. While this mixture comes to a simmer, crumble the tortillas for the topping. When the mixture starts to simmer and the rice has partially absorbed the liquid, stir in the cilantro, pour the mixture into a 13- by 9-inch baking dish, and top with the corn tortillas.

For a little extra kick and to reinforce the smoky flavor of the dish, add a couple of tablespoons of chipotles in adobo. A little of these smoked and dried jalapeños stewed in tangy tomato sauce goes a long way in adding depth and heat.

The thirty-minute baking time and the generous yield makes this crowd-pleasing dish perfect for gatherings with family and friends. And if your crowd isn’t so big, the recipe halves easily halves.

In addition to this Black Bean & Rice Gratin, we’ve developed a Mediterranean White Bean & Orzo Gratin and a Chickpea and Pearl Couscous Gratin. 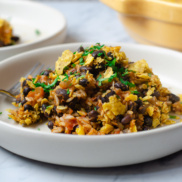 This recipe easily halves and if you do, cook it in one of two ways—simply follow the recipe here and bake it in a 9-inch square baking dish. Or, cook it in a soup kettle until the liquid has absorbed and grains are tender, sprinkle it with the crumbled tortilla chips, and carefully broil it until chips have browned. For the other two gratin variations, we use the bean cooking liquid with enough broth to equal a quart, but since black bean cooking liquid is dark, we drain and rinse the beans and use all broth as the liquid. *For a little extra color and flair, sprinkle with thinly sliced scallion greens once the gratin comes out of the oven. *For a little extra heat, stir in 2 tablespoon of chopped canned chipotle chiles in adobo, along with the broth or, when serving, set out bottles of your favorite hot sauce.

View all posts in Variation 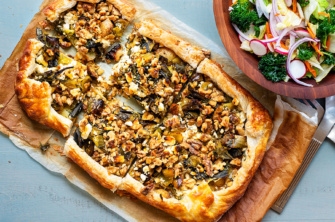 Roasted Leek and Potato Galette with Feta and Walnuts 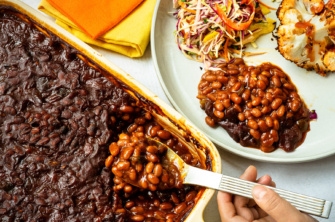